$290,000 wrongful death settlement on behalf of a 12 year-old boy who, according to four independent witnesses, was riding his bike on the shoulder of a road when he swerved into traffic, causing a collision. At their depositions, the four witnesses recanted their prior statements, indicating that the driver of the van may have been on his cell phone at the time of the accident.

Serving all of Michigan 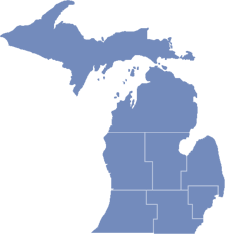